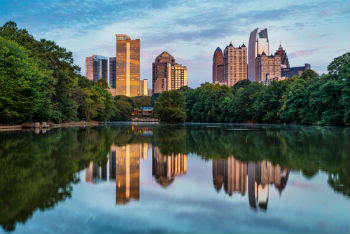 Trendy downtown living is one way to describe Midtown, Atlanta. It's the city's second largest financial district, yet it occupies a mere 4 square miles. High-rise buildings galore, Midtown is a major player in Atlanta's changing cityscape. But the skyline isn't the only thing influenced by Midtown—the residents rave about the ease of living within walking distance of everything they could ever need.

High-rise condo development has spurred an influx of downtown dwellers, who find the combination of work and play in Midtown rather appealing. Single-family home dreamers need not despair, for Midtown offers plenty of real estate within more established communities, including Ansley Park.

This Atlanta community is home to the city's architectural gems, such as the High Museum of Art and One Atlantic Center. Architectural delights continue into the residential areas, with homes for sale in Midtown offering modern interpretations of the classic styles seen in the area's early days. Georgian Colonial influences predominate, with wide front porches and gabled roofs lending to the community aesthetic. As a downtown lifestyle becomes the most attractive option for young buyers and urban powerhouses, the condo development in Midtown continues to soar. A strong arts culture has been fostered in Midtown, with museums and art centers acting as an anchor for local culture enthusiasts. Its dining options abound, and it's the centerpiece of Atlanta entertainment.